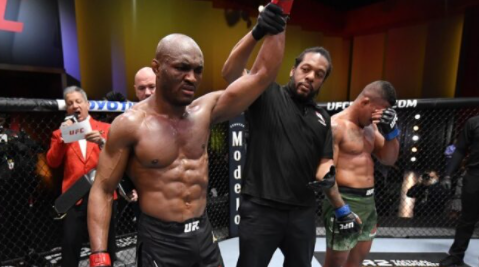 Nigeria’s Kamaru Usman popularly referred to as the ''Nigerian Nightmare'' has knocked out Gilbert Burns of Brazil to defend his UFC welterweight title for the third time. Kamaru defeated his former teammate and challenger in a fight that took place at the UFC APEX in Las Vegas. He won the fight in round 3 to record a 13th consecutive victory in the 170lbs division at UFC 258. After his victory, the 33-year-old who has an 18-1 win fight record, said “This one was hard for me because it’s hard for me to come in without all the emotions. Gilbert is a guy that I’ve known from the start. I love him and this one was tough for me to deal with.Everybody else, y’all need to put some respect on my f*cking name. I am the welterweight champion for a reason. I’m here to stay.”  The post Nigerias Kamaru Usman knocks out Gilbert Burns to retain his welterweight title appeared first on Linda Ikeji Blog.